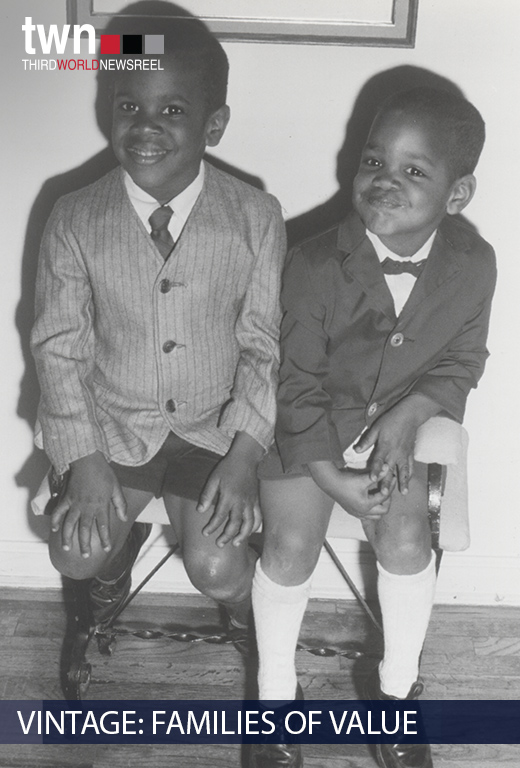 Vintage: Families of Value
Thomas Allen Harris
1995
Color
72 minutes
US
English
Trailer and More
-  Watch Trailer
Photos
Vintage: Families of Value
VINTAGE is an experimental documentary which looks at three African American families through the eyes of lesbian and gay siblings--including the filmmaker and his younger brother. Three groups of queer siblings use video cameras to articulate the multiple stories that co-exist within the space of family, negotiating sexuality as a point of departure to explore these relationships. VINTAGE crosses the boundaries of truth, gender, time and power to create a collective and autobiographical portrait of modern American families.

VINTAGE is the first installment of the Paulding Avenue Trilogy, which also includes E MINHA CARA and TWELVE DISCIPLES OF NELSON MANDELA.

"Harris empowers his audience to universalize the black family, across class boundaries, from its gay and lesbian children. He positions black queer siblings as emblematic of African American life." - Sarah Shulman
"Harris' film succeeds at appropriating the Black family from its demoralizing public media representation through a radical framing of the Black family within a Queer context... VINTAGE reconfigures the terms Black and family in an attempt to depict the difference and diversity of meaning which these terms suggest." - Laura A. Harris, African American Review
"Much of Thomas Allen Harris's film work has involved looking into his personal history, which was shaped by the absence of his father, childhood years spent in Tanzania, his gay identity, and a grandfather interested in photography. While the emotional resonance of his films may reside in his family stories, Harris opens up the possibility of political action and social change by placing them within larger community contexts. His films boldly move from pain to celebration, from the personal to the epic." - Kathy Geritz, Film Curator, Pacific Film Archive
"The historical backdrop upon which Harris illuminates his stories is riveting. He uses original footage and stills shot by his family during pivotal times in history: the Martin Luther King, Jr. assassination, the Black Pride movement of the '70s and the anti-Apartheid movement in Africa. He is an eyewitness to history, and his trilogy dovetails his inquiries into personal and cultural identity with the sociopolitical spirit and vibrancy of a period in history that the media barely covered." - Adrena Ifill, Documentary Magazine
“[Thomas Allen Harris] concentrates primarily on the ebb and flow of sibling relationships in his lyrical film, punctuated by fantasies and performance sequences. VINTAGE is a beautiful, heartfelt film with a tonic effect.” - Los Angeles Times
“VINTAGE is a video family album of queer children, their parents and friends, and its full of the idenity dissection Harris is so good at.” - Time Out New York
“In a fluid mix of homey video interviews and gorgeous Super 8 images, Harris knits his complex relationship with [his brother] into the broader context of deep loyalty.” - Planet AFRICA