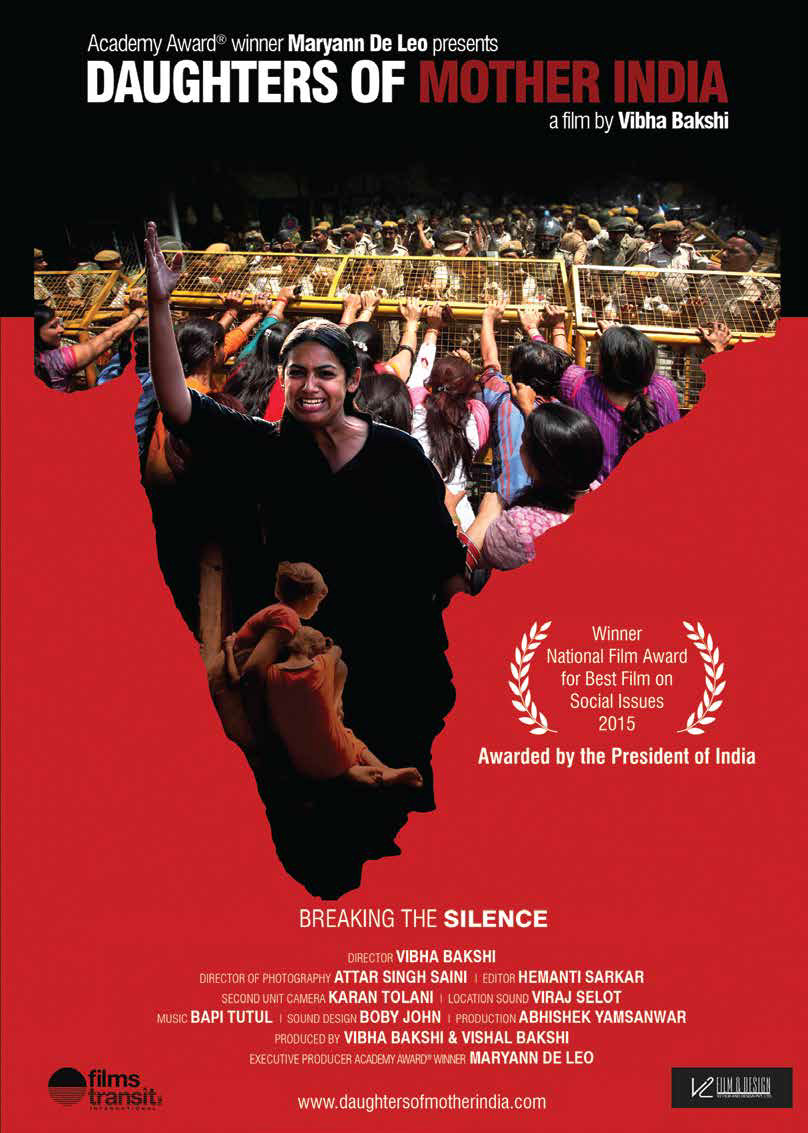 DAUGHTERS OF MOTHER INDIA reveals the aftermath of the horrific rape and murder of a 23-year-old medical student in Delhi in December 2012. For weeks, mass protests filled the streets of India and the country witnessed gender consciousness and extraordinary solidarity by ordinary citizens—like never before. The eyes of the world were on the country’s rampant gender violence, and stories about violence against women in India were hitting the world’s headlines almost on a daily basis.

In this documentary, Indian journalist and filmmaker Vibha Bakshi questions how Indian society is changing after the 2012 events. Although an Anti-Rape Law was passed and radical changes were made within the police force and the judiciary, gender violence still persists. Did anything change? Throughout the film Bakshi probes local judges, police officers, teachers, activists and even street performers that are fighting against gender violence on a daily basis, while simultaneously showing the critical role that each one of these social actors must play to bring real change in India.

Since its release in 2013, DAUGHTERS OF MOTHER INDIA has become a tool for social change and it's having unprecedented impact in India by transforming attitudes on women’s rights. Schools, police departments, community organizations and corporations are screening the film to their constituents. Most recently, the film was awarded the National Film Award for Best Film on Social Issues by the President of India, Pranab Mukherjee.

DAUGHTERS OF MOTHER INDIA is part of the 2016 New Releases Catalog:
http://twn.org/catalog/guides/TWN_2016NewReleases.pdf

"DAUGHTERS OF MOTHER INDIA focuses on the national conversation generated by the case, and on reform in the police and court systems." - The Guardian
"Filmmaker Vibha Bakshi's powerful documentary examines the aftermath of the 2012 rape and murder of 23-year-old Jyoti Singh Pandey (aka Nirbhaya) in Delhi. Indian journalist Bakshi recounts the horrific details of the attack, before interviewing activists, educators, students, Delhi police, and people on the street to gauge the impact of the outraged protests across India that followed Nirbhaya's death. The shock of this brutal attack occurring in the middle of Delhi brought heightened attention to the misogyny and violence suffered by Indian women, resulting in crowds of angry citizens filling the streets. Three months later, anti-rape law recommendations that had been "pending" for years were finally passed: fast-track courts were set up to quickly prosecute cases of sexual violence: and police who failed to record complaints of gender-based crimes were held criminally accountable. Public awareness also led to a sharp increase in reported cases of domestic violence. Sociologist Dipankar Gupta offers insightful background commentary here on deep-rooted cultural attitudes towards women, virginity, and rape in Indian society. Bakshi also reports on efforts to educate schoolchildren about "good touch, bad touch", and sensitize police forces to gender issues, and she visits a Delhi street theater troupe whose performances raise awareness of sexual violence. Providing an inspiring look at initiatives meant to counteract longstanding attitudes within Indian culture that are dangerous to women, this is highly recommended." - M. Puffer-Rothenberg, Video Librarian Magazine