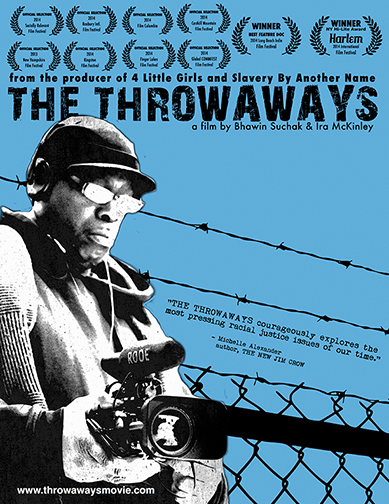 The Throwaways
Bhawin Suchak & Ira McKinley
Producer: Bhawin Suchak & Ira McKinley, Executive Producer: Sam Pollard
2014
Color
62 minutes
US
English
Trailer and More
-  Watch Trailer
-  Democracy Now! Special
Photos
Press Packet
The Throwaways
THE THROWAWAYS is a personal exploration of the devastating impact of police brutality and mass incarceration on the black community told through the eyes of formerly incarcerated activist Ira McKinley. With a raw and powerful urgency, the film speaks directly to the national movement that is rising up and fighting back against a wave of police killings of black people in America.

THE THROWAWAYS, winner of Best Documentary Award at the Long Beach Indie Film Festival and the New York Hi-Light Award at the Harlem International Film Festival, is the story of homeless filmmaker and ex-felon, Ira McKinley, documenting his struggle to bring positive changes to his community in inner-city Albany, NY. As he strives to get his voice heard and capture the stories of people living on the margins, McKinley confronts the unavoidable stories of his past and battles against the stigma of being formerly incarcerated.

Guided by this personal narrative of survival, THE THROWAWAYS is a timely and provocative look at the impact of mass incarceration and police brutality on black males in America. More than an illumination of marginalized people at their weakest moments; this film is a call to action, a story of directly engaging in the fight for justice.
Study Guide available with DVD purchase.

"THE THROWAWAYS courageously explores the most pressing racial justice issue of our time: the mass incarceration and profiling of poor people color." - Michelle Alexander, Author, "The New Jim Crow"
“Amidst national outrage over police brutality across the country, THE THROWAWAYS documents police shootings and the consequences of mass incarceration in upstate New York. THE THROWAWAYS focuses on the idea that certain lives in our society are considered disposable.” - Amy Goodman, Democracy Now!
"Because McKinley is a participant-observer, he is uniquely able to get up close and personal with friends, neighbors, activists, and dealers in this film that brings Ferguson, Missouri home to New York State." - Film Columbia
"THE THROWAWAYS traces McKinley's troubled past and the larger struggle for economic and social justice in the city's impoverished South End and beyond." - Paul Grondahl, Albany Times Union
"...In light of the Michael Brown and Eric Garner cases, the themes of THE THROWAWAYS, and its exposure of the New Jim Crow in American society, are sadly all too topical, with McKinley’s attempt to bear witness to its impact carrying power..." - Basil Tsiokos, What (Not) To Doc Blog
"THE THROWAWAYS is a courageous and important film that everyone in America needs to see." - Bill Duke, Actor/Filmmaker
"Given the incidents surrounding the tragic and unnecessary deaths of Michael Brown and Eric Garner, THE THROWAWAYS becomes more relevant with each passing day. I will be using it in my classroom to facilitate discussions about race, crime, and law enforcement that our policymakers should also be having." - Katie Owens-Murphy, University of Minnesota Duluth
"By putting the subject behind the camera, THE THROWAWAYS offers an invaluable, and overlooked perspective, to the long enduring problems of mass incarceration and poverty often faced by people of color." - Joseph Raymond Gibbons, Colgate University
"Ira McKinley tells his own story with force and sincerity. He tells the story of a black man, thrown away by society, tethered to an unsympathetic criminal justice system, trying to make a life in a community confronting the same struggles he faces. His story, unique and at the same time common, predicts an inevitable pushback against a society that has cast away many of its citizens and against a criminal justice system that has demonized an entire race of people... THE THROWAWAYS is a tool to for us to share with students; an instrument that illuminates the frustrations of a community and offers context to the upheavals taking place in our streets today." - Victorio Reyes, Siena College
"With searing detail, THE THROWAWAYS makes clear the devastating consequences of an unspoken, but implicit stigma ensnaring many black and brown people and communities - the ideology that some people and groups are "disposable" and undeserving of empathy and concern. Witnessing the courage, resolve, and resilience of Ira and other social justice activists captured in the film is arguably the most important take-away from the film..." - Jennifer Mueller, Skidmore College
“Seeing THE THROWAWAYS was a humbling, inspiring and eye-opening experience that has challenged me to push myself to find ways to use my privilege to further the cause of social justice and racial equality. With high profile cases of police brutality against the black community, there is no more appropriate time to screen a film like THE THROWAWAYS that promises to provoke a candid discussion of race, power and the need for change.” - Julie Odar, Teacher, Baltimore, MD
"THE THROWAWAYS, is a clarion call; a timely trumpet of truth that where we are nationally is the spillover of where too many of us have been, individually, for a very long time. This film puts the links together in showing that poverty, broken educational systems, hunger, homelessness, incarceration all create the brew of violence that Ferguson, Michael Brown and other murders, have brought to the forefront." - Imani Sao Vincente, Minister, Boston, MA
​"​Recent incidents of police mistreatment of black men in America make this documentary by Bhawin Suchak and Ira McKinley a timely one, focusing on McKinley's work as a community activist in Albany, NY.​..​ All the materials seems quite relevant today, but the most timely sequence centers on the reaction to the ​​fatal shooting of 19-year-old Nah-Cream Moore during a routine traffic stop in 2011... Events in Ferguson and Baltimore suggest that things have sadly not changed much. Recommended.​" - F. Swietek, Video Librarian Magazine