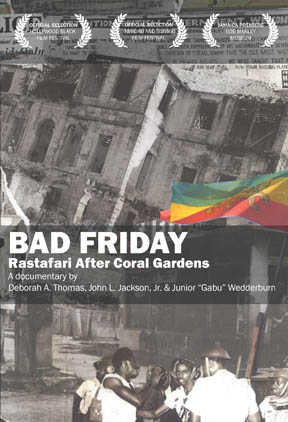 For many around the world, Jamaica conjures up images of pristine beach vacations with a pulsating reggae soundtrack. The country, however, has one of the highest per capita murder rates in the world, and the population is actively grappling with legacies of Western imperialism, racial slavery, and political nationalism – the historical foundations of contemporary violence in Jamaica and throughout the Americas. BAD FRIDAY focuses on a community of Rastafarians in western Jamaica who annually commemorate the 1963 Coral Gardens “incident,” a moment just after independence when the Jamaican government rounded up, jailed and tortured hundreds of Rastafarians. It chronicles the history of violence in Jamaica through the eyes of its most iconic community, and shows how people use their recollections of past traumas to imagine new possibilities for a collective future.
"Bad Friday, The Soundtrack" is also available from Third World Newsreel

"Fire is the Light of Struggle", paper collage by Theodore A. Harris

"BAD FRIDAY is live evidence for reparations from the Government of Jamaica for the Coral Gardens atrocity of 11 April 1963. The Prime Minister Sir Alexander Bustamante’s order to “Bring in all Rastas, dead or alive!” is a crime against humanity that should not be forgotten." - Ras Iyah V and Ras Flako, Rastafari Coral Gardens Committee
"Amidst the proliferation of films on Rasta, none have managed to fathom the Rastafari experience of their Jamaican Babylon like Bad Friday. Now that Rasta is an increasingly co-opted global culture, this is as close as the untutored will get to understanding the meanings of being ‘Dread’ during the pre-reggae period when adherents were viewed as a ‘cult of outcasts’ and routinely victimized. A powerful and timely historical document that speaks to the ways that remembering-and-forgetting continue to shape Jamaica’s post-colonial identity. " - Jake Homiak, Curator of ‘Discovering Rastafari’, Smithsonian Institution
“BAD FRIDAY inaugurates the first in depth account of Jamaica’s own Easter Rising—in any medium. When, at Easter 1963, Rastafarians rose up at Coral Gardens, on what was once part of the infamous Rose Hall plantation, they were seeking to avenge themselves against a ‘Babylonian’ system of rampant social injustice. By bringing to us the poignant testimony of the men and women who witnessed and whose lives were forever scarred by these events, Bad Friday obliges us to confront the shocking level of state violence that was unleashed against not only the individuals involved, but also against the entire Rastafarian community of Jamaica, most particularly in the parish of St. James where the rising occurred. And like the slave risings of an earlier time, absolutely no mercy was shown by the regime in power. How ironic it was that the events and their violent aftermath should have occurred in the very first year of the new postcolonial Jamaica. In this sense, Coral Gardens was an omen, if one was needed, that things were going to go badly in the Afro-slave yard in Jamaica. Now, thanks to this evocative film, we are able to appreciate the full horror of the events from that distant time and what they portended. I salute and congratulate everyone involved in the making of this redemptive and truly valuable work of historical memory.” - Robert A. Hill, University of California, Los Angeles
"Deborah A. Thomas, John L. Jackson Jr., and Junior “Gabu” Wedderburn helmed this compelling documentary on one of the most controversial episodes in modern Caribbean history, the so-called “Coral Gardens incident” in Jamaica during the Easter season in 1963. The event, according to official reports, was triggered by a land dispute, which quickly devolved into a police action that led to fatalities—in addition to the arrest, jailing, and torture of more than 150 members of Jamaica’s Rastafarian community. Bad Friday argues that the arrests were the culmination of decades of harassment and violence against Rastafarians, noting that even the transition from colonial British rule to Jamaican independence in 1962 failed to quell the anti-Rastafarian policies on the island. Interspersed among contemporary and archival footage/stills are interviews with survivors, who offer a tragically eloquent record of the abuse that the group faced at the hands of their fellow Jamaicans (the current government is uncomfortable with openly addressing the incident or showing remorse for the brutal aftermath). While the wider world knows about Rastafarian cultural expressions, this documentary presents their story as the target of state-sanctioned discrimination. An invaluable addition to Caribbean cinema as well as an important work about the region’s tumultuous history, this is highly recommended. " - P. Hall, Video Librarian